An obscure aerogramme and the hunt for a building

Manfred
November 2017 edited April 2018 in Stamps and Postal History
Do you have "sALS43" in your collection?
I am talking about Liberia's last air letter sheet, or aerogram(me): 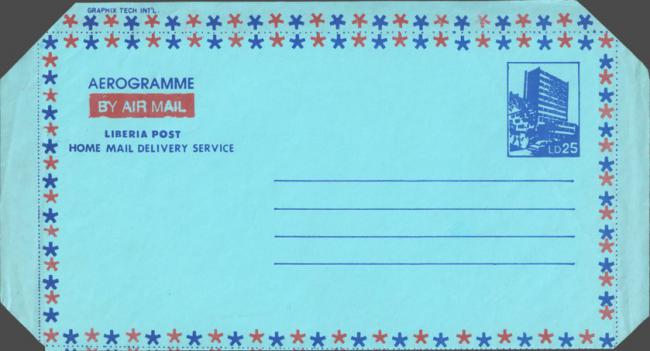 Until recently, I only knew it from Bob Shoemaker's book about Liberian stationeries. Listed there as no. 43, we are informed that this aerogramme was issued in "1999?", has the text "GRAPHIC TECH INT'L" at the top sealing edge, an insignium holding a "dark blue building and trees" and the value of 25 LD at the bottom, and its scarcity is given as VS (very scarce) mint and used. In my opinion the estimate is kind of an understatement. Given how long I had to wait until I could finally add this item to my collection, I would say at least two Rs are in order, if not three. Shoemaker himself doesn't seem to have owned one, as the picture in his book shows a photocopy.
Please note that the text at the top edge actually reads "GRAPHIX TECH INT'L.", with an "X", not a "C". Google only returns one useful result, namely a facebook page of "Graphix Tech International" in Kampala, Uganda. Well, why not? Looks like this aerogramme is an African product.
Shoemaker suggests 1999 as the year of issue, but with a question mark. In 1998 the government realized the Liberian dollar could not be kept pegged to the US dollar any longer, and it was devalued to a new exchange rate of 43 LD per 1 USD. Obviously, an aerogramme with a 25 LD imprint would have been issued after that date, but it could be any of the following years.
The seller I got my aerogramme from bought it himself while he was in Monrovia in 2004, shortly before the riots started and many buildings including post offices were looted. This gives us an upper limit for the year of issue. However, much of value including paper was either taken or destroyed during the riots, so it is unlikely that any aerogrammes survived.
When I received my copy, I was immediately intrigued by the insignium: 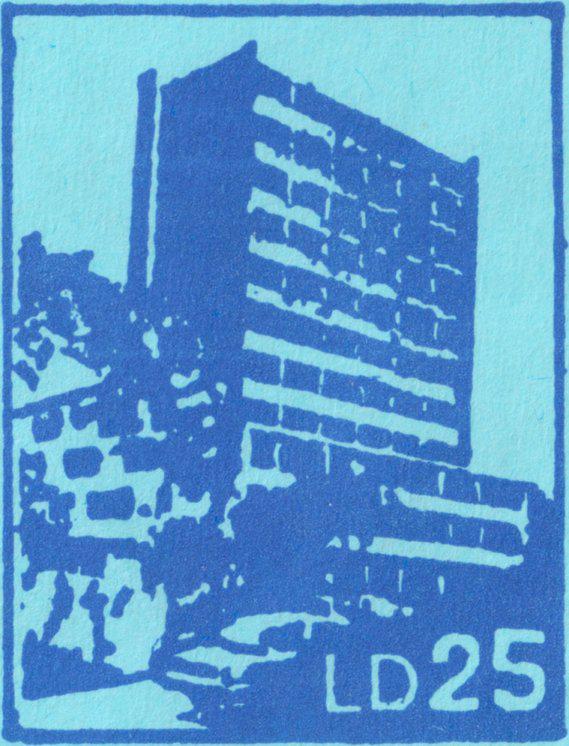 The building looked familiar, but I couldn't remember where I had seen it before. After browsing hundreds of pictures of Monrovia online without success I remembered that Liberia had issued a stamp series featuring prominent buildings in 1962. And yes, there it was, on Scott #404 and C148: the Treasury Department! 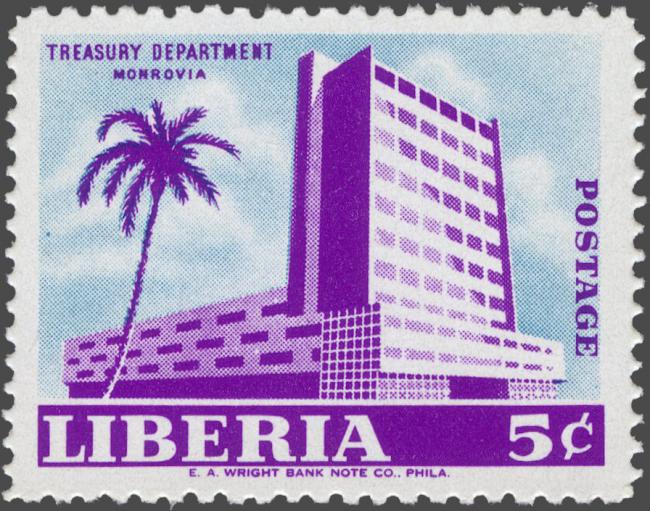 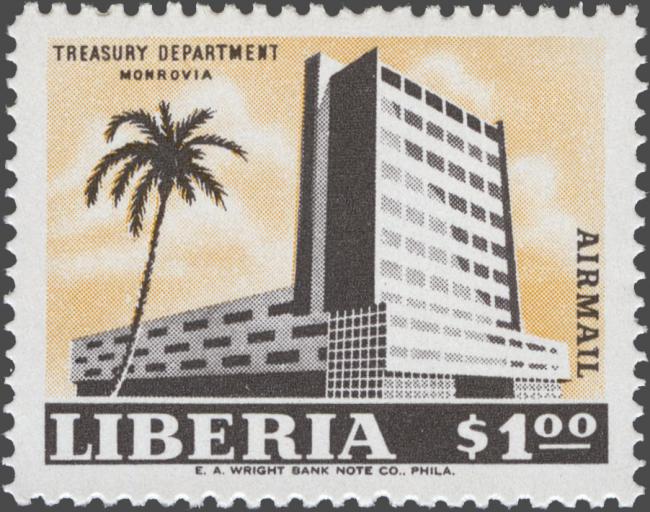 Now I wanted to know where this building actually is. Google Maps was unable to locate the Treasury Department for me, so in a final attempt I turned to my rather modest postcard collection. I should have thought of that sooner. The photo from the 70s below was probably taken from the Ducor hotel, presenting a view to the east. 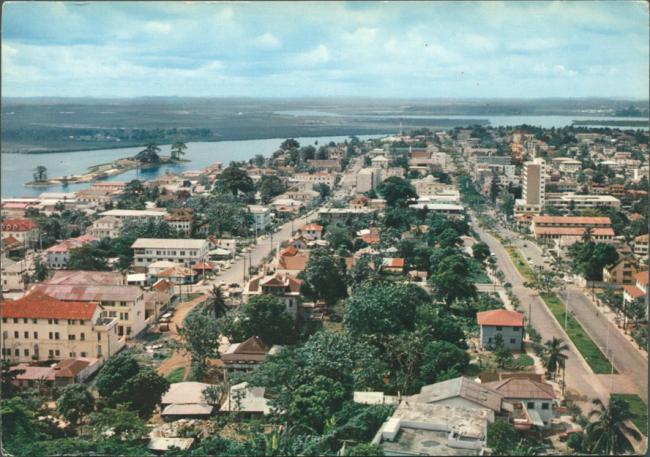 The broad street to the right is, well, Broad Street, the business center of Monrovia. The street running parallel to the left is Ashmun street, and in the background to the left you can see Providence Island in the middle of the Mesurado River. I assume you already spotted the Treasury Department building, its features are characteristic enough. It is the tallest building on the right side of Broad Street.
A few days later I got lucky again, when I found a postcard online presenting a perfect view of the building itself. BTW, the exact location is the corner Broad Street / Mechlin Street. 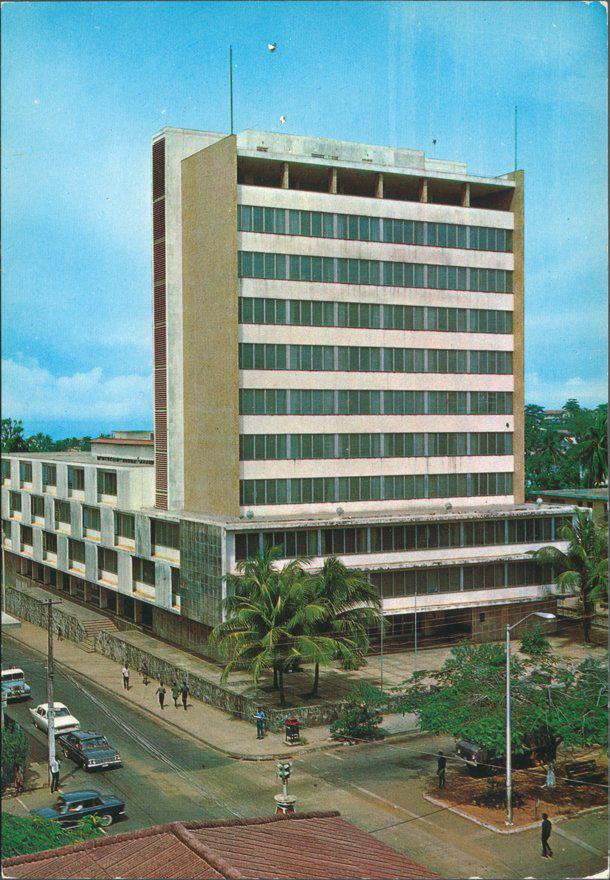 The description on the back of the postcard actually says "Department of Public Works", but unless the Treasury Department moved in, then out and then in again, the description is wrong. According to a "pocket guide" to Monrovia that I also found online the current inhabitant of the building is indeed the Ministry of Finance. Both postcards are from the sixties. After two civil wars, the building doesn't look that neat anymore, I guess. Here is a snapshot from 1994: http://www.gettyimages.de/detail/nachrichtenfoto/people-stand-outside-the-ministry-of-finance-building-nachrichtenfoto/535989636#people-stand-outside-the-ministry-of-finance-building-in-monrovia-picture-id535989636

Finally, I would like to show a postcard with an aerial view of another iconic building of Monrovia: The Ducor Intercontinental Hotel. I already mentioned that the first photo was probably taken from the Ducor Hotel, and on this postcard you can see why. It is by far the most prominent building around, and predestined for taking panoramic pictures. The Treasury Department would be outside to the right of the photo, but you can see Providence Island in the upper right corner. 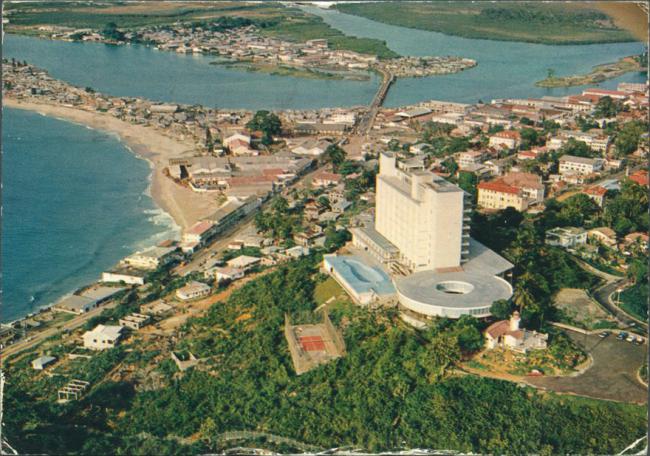 I am sure, had the Ducor Hotel already been finished by the time the buildings stamps were issued - the hotel opened its doors in 1967 - it would have become part of this stamp series. Unlike the other two postcards, this one actually traveled. It was sent on October 21, 1968 from Monrovia to London, thus it shows the building immediately after it was finished. Like the Treasury Department, the Ducor Hotel had to endure two civil wars, but while the owners of the Ministry building were able to stay or at least to return, the hotel didn't get off so lightly. If you are interested in what it looks now, brace yourself and click this link: http://desertedplaces.blogspot.com/2015/11/the-deserted-ducor-hotel-of-monrovia.html